Toxic Gasses - a look into Weezing

Written by Gabriel Smart on 12/2/2021 at category Deck Lists
Hey everyone, it's Gabriel Smart back with another article for you guys! Today, we will be going over a deck that not many people have been talking about but has proven itself to be a relatively rogue solid deck. With Fusion Strikes release it has given a new life to some brand new decks. With psychic-type decks becoming the most popular deck in the format, it feels like it is finally time for Weezing to shine! If you are looking for some PTCGO codes, make sure to check out PTCGO Store. They have some of the best deals on the market for PTCGL codes! Now, let's take a look at Weezing!

A couple of weeks ago. FullGrip Games in Northern Ohio hosted a 1k tournament on Saturday, followed by Gym Leader Challenge format 1k the next day. During the Standard 1k tournament John Mostowy, who I have had the opportunity to play before and is a lovely person, piloted a rogue deck that saw astounding success. That deck was Weezing (Shining Fates) Crobat VMAX(Shining Fates). The strategy of this deck is to slow down the opponent with Weezings Neutralizing Gas ability and proceed to follow that up with attacks from Crobat VMAX (Shining Fates), Moltres V(Chilling Reign), or Sableye V(SWSH) to finish up the game.
My list is slightly different from John's, and a massive shout-out to him for inspiration! Let's get into the deck! 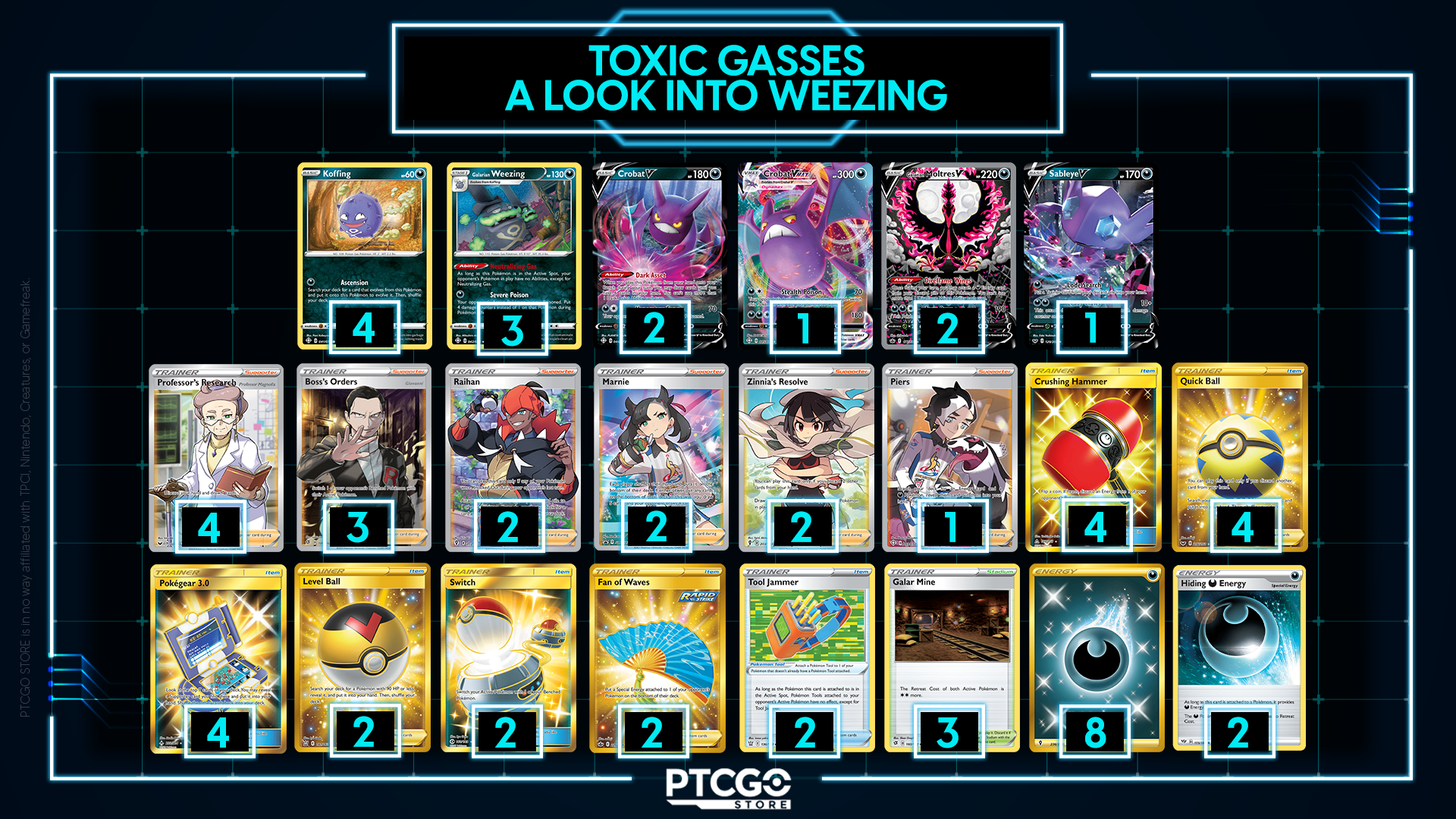 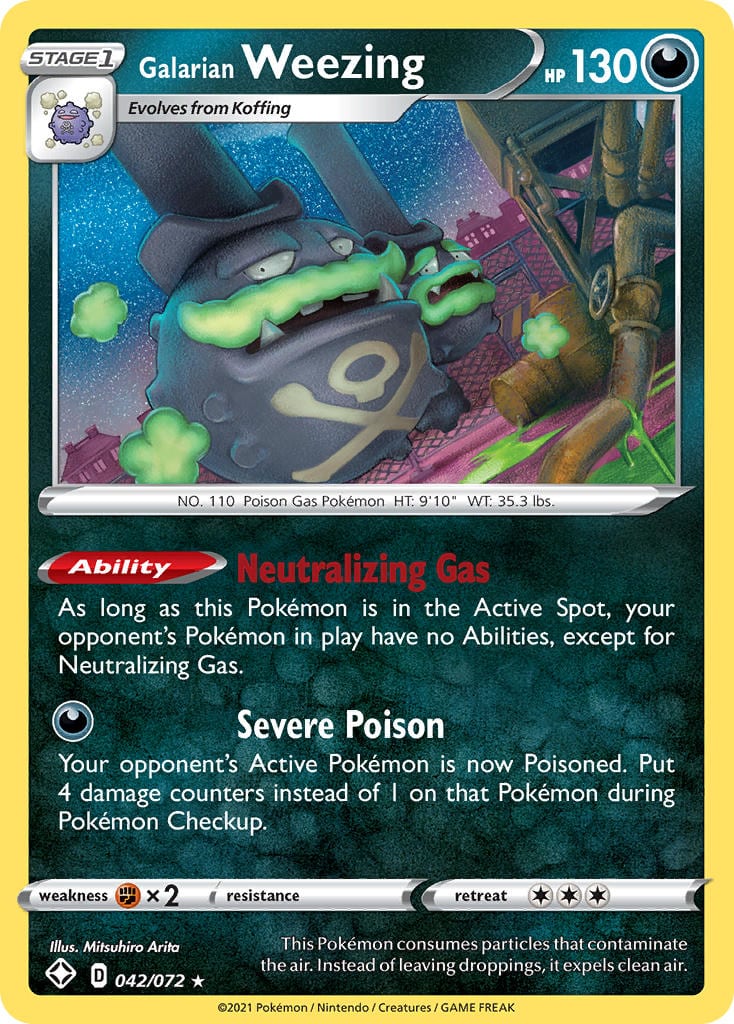 Weezing has been a deck that has seen pretty sporadic play in its lifetime. Now, it has finally found a spot in the metagame! Weezing clocks in at 130 HP, making it a rather bulky stage one non-V Pokemon. This toxic Pokemon's ability "Neutralizing Gas" is what takes it to the next level! Over the years, the Pokemon Trading Card Game has become a game that is reliant on abilities to carry decks to victory. In this particular meta, almost every major deck in the format relies on some knowledge to achieve its strategy. Off the top of my head, I actually can't think of a deck that doesn't rely on abilities. This means that Weezing will be able to buy us critical turns to set up our board state.
Along with great ability, Weezing has a respectable attack as well. Severe Poison poisons the active Pokemon, and in between turns, they take four damage counters instead of 1. This means that the opponent's Pokemon will be softened up for Sableye V or Moltres to wreak havoc on their attackers! 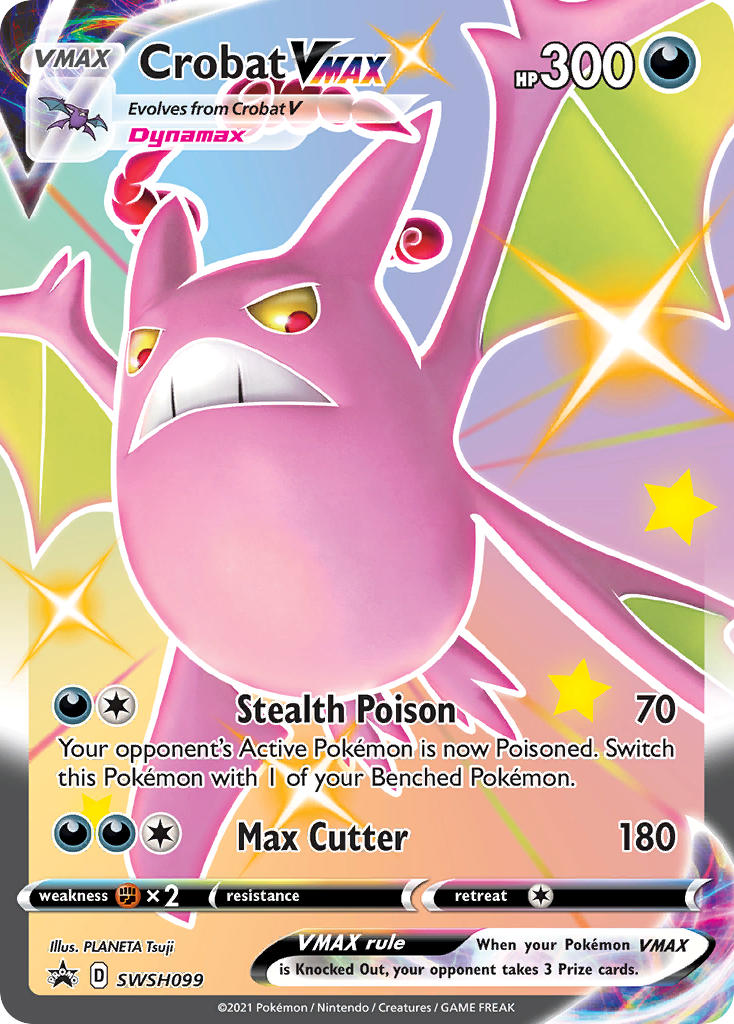 To say Crobat VMAX does not typically see play would be an understatement. The last time this card ever remotely saw play was when it was paired up with Altaria (Champions Path). The goal of that deck was to use Crobat VMAX's attack Stealth Poison to deal 70 damage to the active and then hide behind an Altaria that cannot be damaged by Pokemon V or GX. We are going to be utilizing Crobat VMAX, similarly in this deck! The goal is to attack with Stealth Poison and then retreat into Weezing. One of this deck's weaknesses is dealing enough damage early to be able to take over a game, so having Crobat VMAX, provides that extra early game damage and allows us to use still Weezing's "Neutralizing Gas" ability to slow them down. 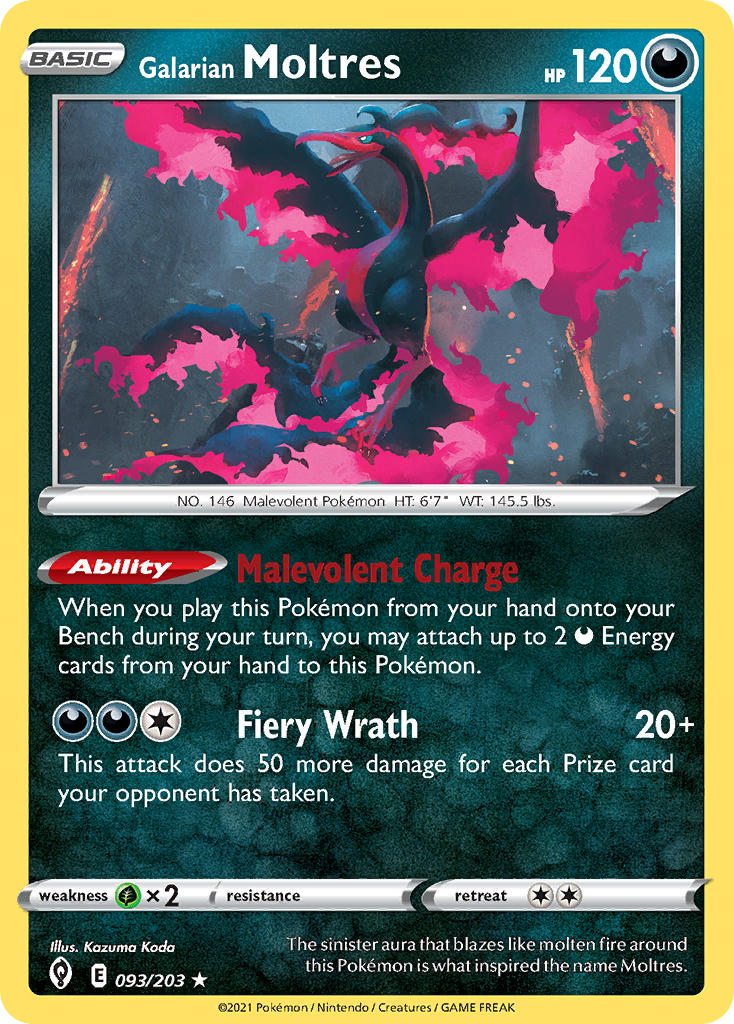 Sense a theme in a deck? The theme is everything in this deck is dark type! Moving onto our next dark type comrade, we have Galarian Moltres V. These cards just make sense in the deck. Its attack, Aura Burn, deals a respectable 190 damage. This amount of damage will one-shot anything weak to dark type and will two-shot any other Pokemon in the game! Along with a stellar attack, its ability "Direflame Wings" will allow us to easily accelerate energy onto our Moltes and Aura Burn over and over again! Currently, I have two copies of Moltres in this deck, as although it is a great attacker, there are so many other great options to attack with! 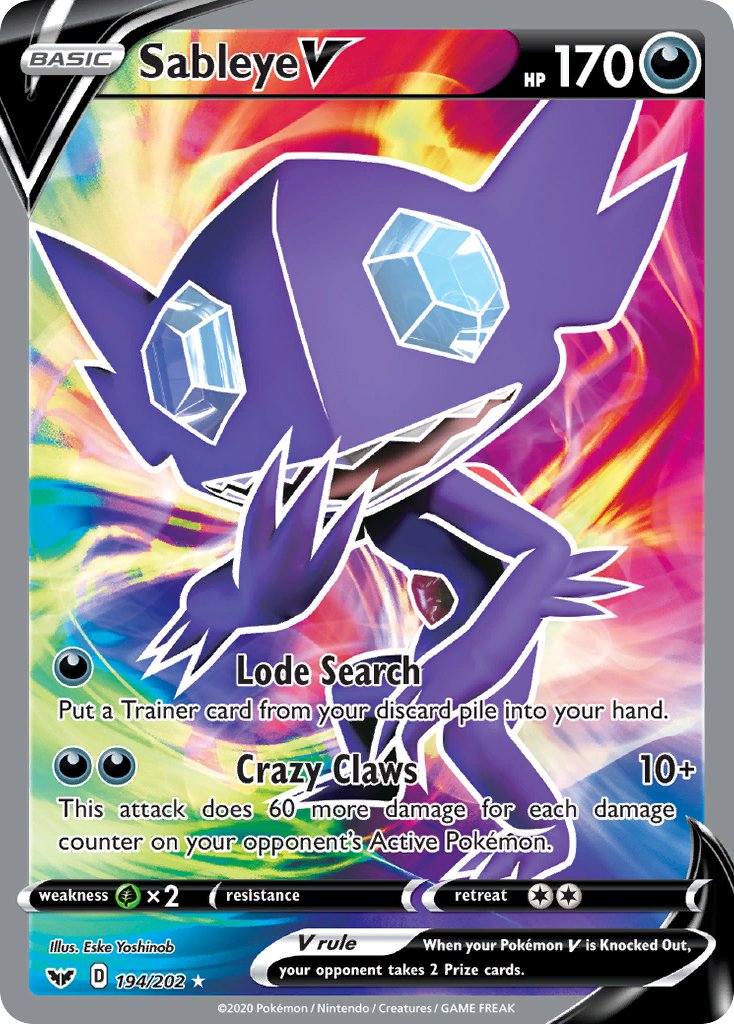 Moving on with our dark attackers, we have Sableye V (Sword and Shield). Sableye's attack Crazy Claw deals 60x60 for each damage counter on your opponent's active. Weezing or Crobat VMAX's attacks will easily set up enough damage to take swift knockouts with Sableye. On top of this, Load Search is a fantastic resource recovery attack that will get us back needed trainers at different points in the game. Currently, it is a one in the deck, but I could see it going back up to a two count. 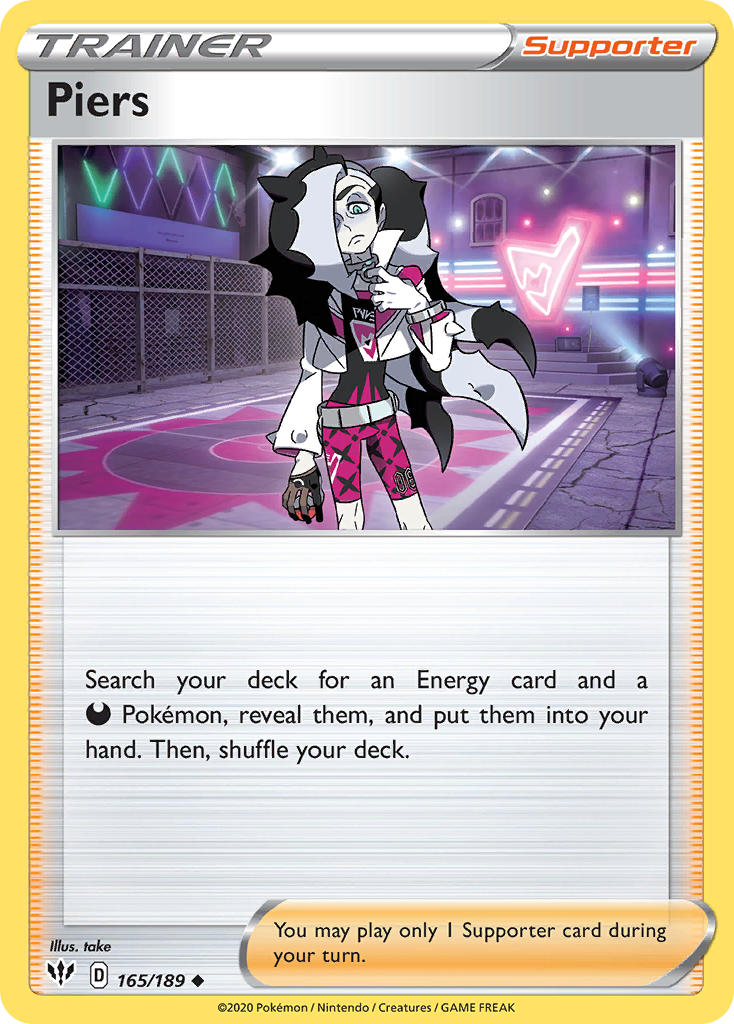 One of these decks' bigger flaws is that they can suffer from not being able to set up quickly enough. Having a supporter that finds dark energy, along with a dark Pokemon, is a great way to consistently achieve the board state you desire. Currently, I have two copies on the list, and that count has felt fine so far. Even just having the ability to search for dark energy is fantastic. 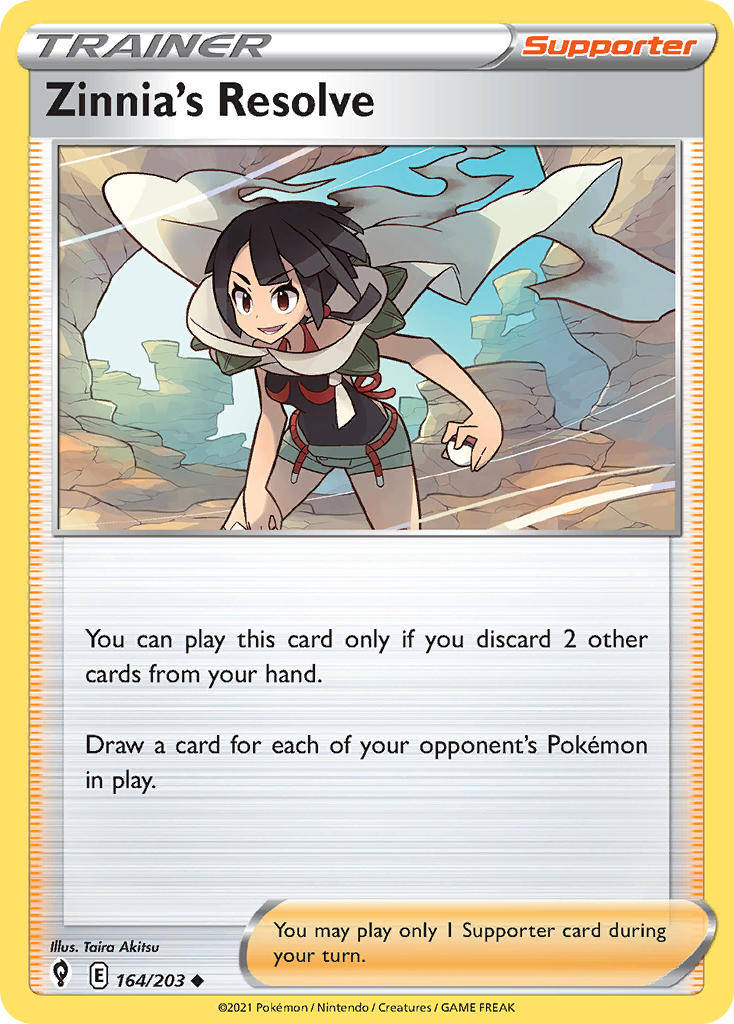 Zinna's Resolve is a card that actually has been receiving more and more talk recently. Our deck has the capability to utilize it perfectly! Due to cards like Raihan (Evolving Skies), and Moltres V (Chilling Reign) needing energies in the discard to utilize their effects, having another way to discard dark energy serves as a very useful added effect of this card! On top of the discard effect, its draw potential is there. With so many pokemon online decks being reliant on filling up their entire bench, Zinnia's Resolve will be able to be used, at its maximum potential. Currently, I have two copies of the card on the list, but at some point, I would love to find room for a third one. 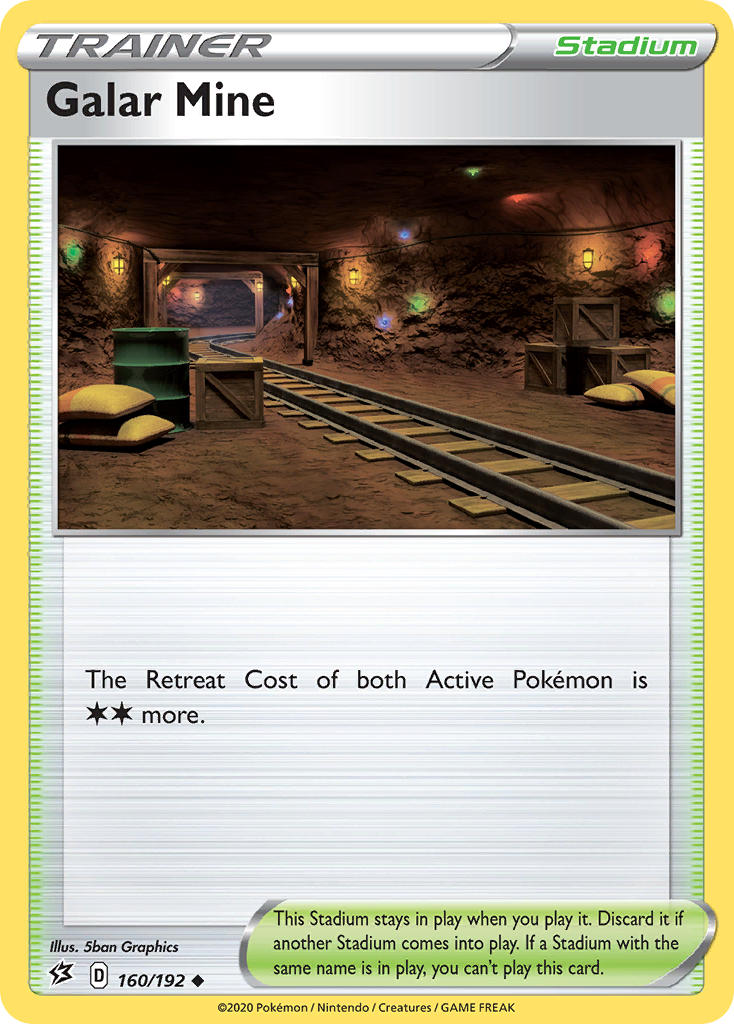 Currently, in this format, there are a plethora of stadium cards that decks love to utilize. Path to the Peak (Chilling Reign), Crystal Cave (Evolving Skies), Old Cemetery (Chilling Reign), Stormy Mountains (Evolving Skies), and Training Court (Rebel Clash) are just some of them that are used. So with that being said, it is critical to have a stadium replacement that counters their own. On top of being a stadium replacement, Galar Mine will serve as a fantastic way to slow down your opponent. With so many pokemon online decks in this format, cutting switching outs will make it even harder for them to retreat their Pokemon. This will allow for Weezings damage to add up and will give us time to set up. 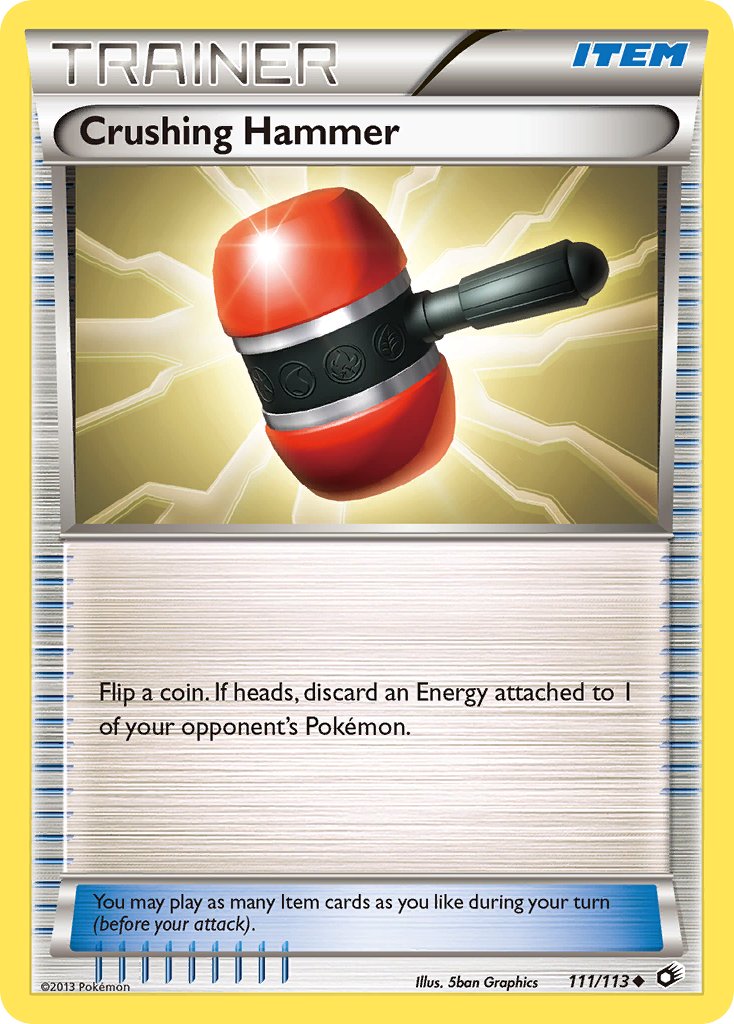 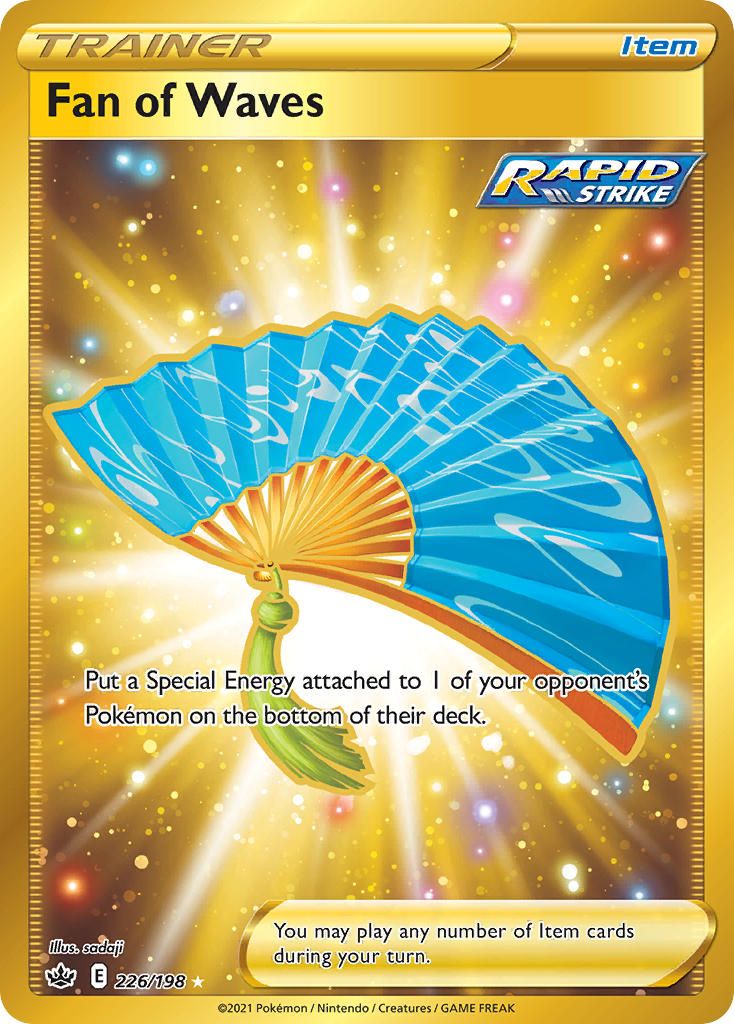 Although this deck is great at disrupting on its own, there are times where it can fall behind quickly, if the opponent draws optimally. Having extra energy disruption like Crushing Hammer (Sword and Shield), and Fan of Waves (Battle Styles), will often give us that extra time to set up. Currently, I have four Crushing Hammer, and two Fan of Waves in this deck, but I could even see a third copy being added in, due to special energy decks being so prevalent in the game.

Thank you all for reading my most recent article on the PTCGO store. Weezing feels like it is poised to become one of the top contenders in the game. It has great disruption, and has some of the best attackers in the game! If you are looking for any of these cards I talked about in my article, make sure to check out the PTCGO Stores code market! They have some of the best deals of PTCGO codes on the market, and will help you get all of the cards you need to be successful! Thank you everyone for the support, have a wonderful day, and I hope to speak with you again soon.

Gabriel Smart is a contributing article writer for PTCGO Store. Gabriel currently resides in the Sacramento, California area and has been playing the game casually since 2010 and competitively since 2018. He streams on Twitch under the name GabrielSmartTCG, creates competitive Pokemon content on Youtube under the name SmartTCG, and posts about his tournaments results and life on Twitter @GabrielSmartTCG. Outside the game, he is a huge baseball and basketball fan and loves everything to do with athletics.
SHARE THIS POST
Previous Post
Next Post 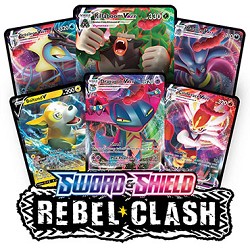