Written by Zach Lesage on 2/15/2021 at category
Shining Fates, the upcoming Pokemon TCG set, looks to bring a bunch of fan-favorite cards from recent sets into the Pokemon Trading Card Game Online when it releases later this month. Featured in the set are exciting new VMAX Pokemon cards, such as Crobat VMAX, and elusive Shiny Vault Pokemon, like GOLDEN Eternatus VMAX. With over 200 cards being added into our PTCGO metagame, this article will showcase some of my favorite cards from the set. If you are wondering about my qualifications to choose the best cards, that’s a completely fair question. I was able to win the Players Cup 2 Event and have over a decade of experience in the game. I also love to collect valuable cards online and I will make this article appealing to both players and collectors alike. Look below to see what cards I chose as my personal top five cards and why I think they are so great.

While most of the other “Amazing Rare” cards haven’t seen much success, Reshiram seems to hold promise with its powerful Amazing Blaze attack. At the small cost of three different Energy cards and doing 60 damage to itself, this card can do 270 in a single turn! A SINGLE TURN?!? Yup! Between Tapu Koko Prism Star (Team Up), Welder (Unbroken Bonds), Turbo Patch (Darkness Ablaze), and attaching for turn it should be simple enough to pull off a few times per game. While 270 damage might seem like a low amount of damage when you attack into a Coalossal VMAX (Vivid Voltage), it should have no struggles to Knock Out a Mewtwo & Mew-GX (Unified Minds). On a side note, collectors will also flock over to this card because it is an elusive “Amazing Rare” card and the artwork is quite gorgeous. it seems like Shining Fates is starting off quite strong!

While Ball Guy has become a bit of a meme phenomenon in the Sword and Shield video game sphere, he legitimately has a chance to see success in our Pokemon TCG Online game if you are able to find him in your Pokemon TCG online codes. Searching for up to three different “Ball” cards might seem weak at first, but Quick Ball (Sword and Shield), Great Ball (Champion’s Path), and Poke Ball (Rebel Clash) have all seen play during our current Standard format. I think that a deck such as Eternatus VMAX (Darkness Ablaze) could potentially gain consistency from Ball Guy and this card will only grow stronger as we see more “Ball” cards getting printed in each set. Speaking about “Ball” cards getting printed, Battle Styles will see a reprint of Level Ball (Ancient Origins) and that means that more decks can potentially run on a Ball Guy engine. The options also grow in Expanded with Ultra Ball (Sun and Moon) and many other “Ball” cards. And just because I know someone out there might try to be smart with the whole Air “Ball”oon comment, this card can only grab “Ball” cards, but good try!

While these cards are odd mentions in a top 5 list, I felt it was fitting to at least talk about these cards from a competitive Pokemon TCG online deck standpoint. Snom (Sword and Shield) has largely never been a strong Pokemon card largely due to the fact that it Evolves into the useful Frosmoth (Sword and Shield) that can attach many Water Energy. With Shining Fates, this new Snom brings on the option to search for another Basic Pokemon instead of having a weak attack like the other Snom. The same can be said for Koffing (Rebel Clash) - it went from having the lowly Suffocating Gas attack to now having the powerful Ascension attack in Shining Fates. Ascension is particularly powerful because it allows you to fast track yourself into the Ability-stopping Galarian Weezing (Rebel Clash). A lot of players often overlook important pre-Evolution Pokemon, but these two stand out against most other Pokemon that can Evolve due to their vast improvements. As a bonus to collectors, they both are featured in this sets Shiny Vault as shiny versions of their regular cards.

When I look through a set nowadays, I am often looking for unique cards that bring a new type of Ability or some kind of new mechanic. You know the ones that make me get out of bed and buy PTCG codes online in the middle of the night. Well, Ditto V might just be that card. It has an Ability called V Transform that allows you to swap Ditto V with another V Pokemon from your Discard Pile. This is great in decks that feature many techs, like Centiskorch VMAX (Darkness Ablaze), because you can flip-flop between Pokemon if they have been discarded from the game already. As if Ditto V wasn’t enough, Ditto VMAX is also seeing a release and you can copy an attack from your opponent’s Active Pokemon with Max Transform! This is especially simple to pull off in a Welder based deck or with a Triple Acceleration Energy (Unbroken Bonds) because it is no longer a Basic Pokemon. I’m sure there will be plenty of zany combinations that you can pull off with Ditto V as more V Pokemon are released in the Pokemon Trading Card Game Online.

Similar to Snom and Koffing, both Manaphy and Celebi provide a similar value to this list. Celebi isn’t much of an attacker with its weak Leaf Step attack, but it does have a unique Ability, Forest Wanderer. If Celebi in the Active Spot, you may look at the top six cards of your deck and find an Energy there to put into your hand. It doesn’t have to be a Basic Energy, it can be a Speed Lightning Energy (Rebel Clash) or a Stone Fighting Energy (Vivid Voltage). With Air Balloon, Mallow & Lana (Cosmic Eclipse), and Switch (Sword and Shield) providing many pseudo-Retreat options, Celebi might find its way in a few top decks. In the same vein, Manaphy has the same Ability, except it works for Pokemon instead of Energy. You can grab a Basic Pokemon, Evolution Pokemon, VMAX Pokemon… You name it - you can grab it! Cards like these are very similar to Jirachi (Team Up), and they seem promising for competitive play!

Shining Fates has been deemed as a reprint set by many Pokemon Trading Card Game Online players because the main set and Shiny Vault are both composed of many cards that we already have in our Standard format. If you have been playing the game for a while, this may seem frustrating, but at least there are a handful of new releases to whet your appetite and allow you to get PTCGO codes. If you are a new player, this set can serve as a “best of Sword and Shield era” release and allow you to fast track your collection in the Online PTCG world. To collectors, they are mostly jumping for joy at the various valuable cards that are hidden deep within this set. Did someone say Charizard? Uh, yes please! As if Charizard VMAX (Darkness Ablaze) wasn’t already prestigious enough, it got a Rainbow version in Champions Path, and now we are looking at a Shiny version in Shining Fates?!?! Obviously, there are a handful of Shiny cards in this set, cough cough over 100 cough cough, but some of these cards are absolutely beautiful to look at! I know that I am excited to open PTCGO packs on release day and try my best to pull a bunch of these Shiny Vault cards! If you are a collector or just a fan of awesome-looking Shiny cards, this set is definitely for you.

As if Zacian V (Sword and Shield) wasn’t strong enough, Shining Fates adds another tool for that Pokemon in the form of Rusted Sword. Rusted Sword allows Zacian V to do 30 more damage to the Active Pokemon and that damage can be compounded by powerful damage modifiers, like Arceus & Dialga & Palkia-GX (Cosmic Eclipse) and Leon (Vivid Voltage). I’m not even sure if Zacian V will need Arceus & Dialga & Palkia-GX anymore because Rusted Sword seems to add a bunch of damage. As with most Legendary Pokemon, most things come in pairs and that means that Zamazenta V (Sword and Shield) has a new toy to play with too, Rusted Shield! Since Zamazenta V is more of a defensive Pokemon, Rusted Shield takes on the same attribute and gives it an additional 70 HP! That means it can tank more hits whether or not you have already used Full Metal Wall GX on Lucario & Melmetal-GX (Unbroken Bonds). Both of these cards seem to add layers of strength to both cards individually and take some of the most successful cards in PTCGO to new heights!

I hope this article has you hyped up for the release of Shining Fates when it releases online later this month. If you think I missed a card or there is another card you want to brag about, be sure to comment on this article to let me know. With over 200 cards in the set, Shining Fates is a large Pokemon TCG set and it will provide opportunities to add some awesome cards into your collection. Whether you are a player or collector, best of luck obtaining all of the cards you want, and be sure to check out PTCGOStore.com for all of your PTCGO code card needs. 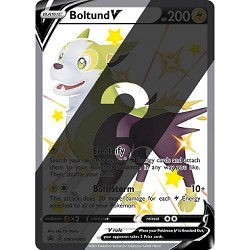 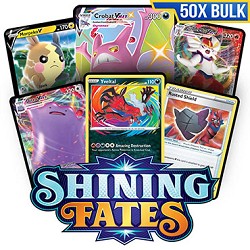 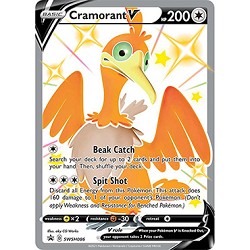 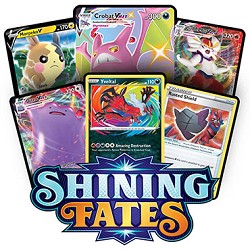