Written by Zach Lesage on 5/14/2021 at category Articles
What's poppin’ PTCGO Store readers? Have you been checking out all of the new PTCGO cards that are going to be released in Chilling Reign? I’ve certainly been drooling over the new cards that have been revealed via Twitter and other Pokemon TCG blog sites! This article will share my early ideas for these concepts and my general thoughts on these exciting cards! I plan on doing a more formal top five video closer to release, but this is an extra early sneak peek into my mind! A huge shoutout goes to the translators at Pokebeach for the translations used in this article. That being said, let’s get it!

Ice Rider Calyrex VMAX (Chilling Reign) offers two strong attacks that can easily get powered up by Melony (Chilling Reign). Melony is similar to Welder (Unbroken Bonds) because it attaches Energy to a Pokemon V and draws cards. That means Emperor Ride or Max Lance can get powered up in a single turn. Emperor Ride can hit for a large amount of damage if your opponent has a large Bench size, but you can always use Max Lance if they’re playing around it. Whichever attack you decide to use, you will be able to one-shot most Pokemon V and two-shot most Pokemon VMAX. The worst thing about this card is the glaring Weakness to Metal-type Pokemon *cough Zacian V (Sword and Shield) cough*, but it seems to keep Victini VMAX (Battle Styles) in check. My gut feeling tells me we are entering a dual rock-paper-scissors metagame based on elemental type, but only time will tell. Either way, this is one of the cards I’m getting giddy about!
Translation:
Ice Rider Calyrex VMAX – Water – HP320
VMAX Pokemon – Evolves from Ice Rider Calyrex V
[C][C] Emperor Ride: 10+ damage. This attack does 30 more damage for each of your opponent’s Benched Pokemon.
[W][W] Max Lance: 10+ damage. You may discard up to 2 Energy cards from this Pokemon. If you do, this attack does 120 more damage for each Energy card discarded in this way.
When your Pokemon VMAX is Knocked Out, your opponent takes 3 Prize cards.
Weakness: Metal (x2)
Resistance: none
Retreat: 2 Translation:
Melony – Trainer
Supporter
Attach an [W] Energy from your discard pile to 1 of your Pokemon V. Then, draw 3 cards.
You may play only 1 Supporter card during your turn.

Shadow Rider Calyrex VMAX (Chilling Reign) seems like a weird combination of Zoroark-GX (Shining Legends) / Malamar (Forbidden Light), which sounds weird at first, but it sounds broken to me. The best way to play this Pokemon deck seems to be starting with Cresselia (Chilling Reign), a Psychic-type spiritual reprint of Volcanion (Unbroken Bonds), and power up a bunch of Energy with Crescent Growth. After spreading those Energy around, the goal is to use Hell Gate to accelerate Energy, draw cards, and set up a huge amount of damage for Max Geist. You can use multiple Hell Gate Abilities for a turn, which means Max Geist is hitting for a bunch of damage really quickly. Similar to Ice Rider Calyrex VMAX, this Pokemon has a glaring Weakness to Dark-type Pokemon, *cough Eternatus VMAX (Darkness Ablaze) cough*. Still, there is plenty of Fighting-type Pokemon to answer that issue. Translation:
Shadow Rider Calyrex VMAX – Psychic – HP320
VMAX Pokemon – Evolves from Shadow Rider Calyrex V
Ability: Hell Gate
Once during your turn, you may attach an [P] Energy card from your hand to 1 of your Benched [P] Pokemon. Then, draw 2 cards.
[C][C][C] Max Geist: 10+ damage. This attack does 30 more damage for each [P] Energy attached to your Pokemon in play.
When your Pokemon VMAX is Knocked Out, your opponent takes 3 Prize cards.
Weakness: Darkness (x2)
Resistance: Fighting (-30)
Retreat: 2 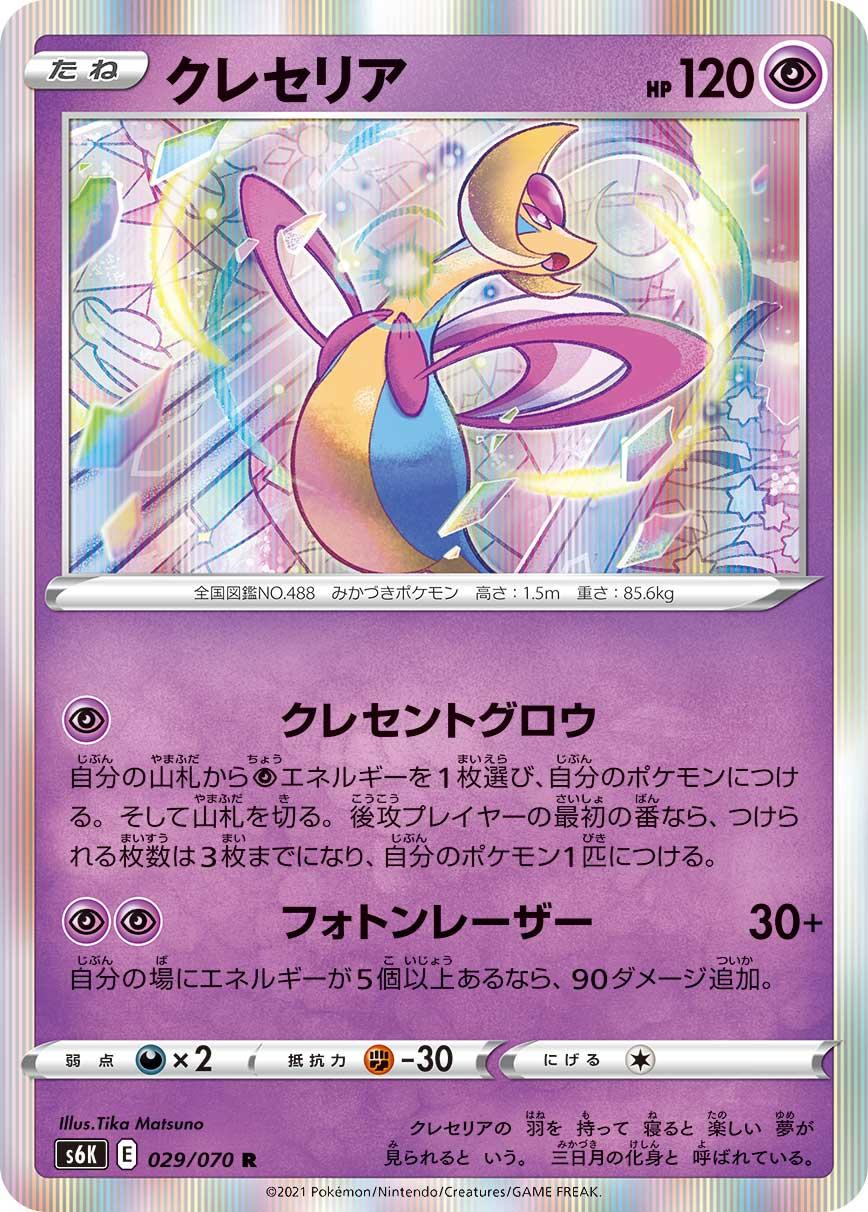 Translation:
Cresselia – Psychic – HP120
Basic Pokemon
[P] Crescent Growth: Search your deck for an [P] Energy and attach it to 1 of your Pokemon. Then, shuffle your deck. If you go second, on your first turn, you may attach up to 3 [P] Energy to 1 of your Pokemon instead.
[P][P] Photon Laser: 30+ damage. If you have 5 or more Energy in play, this attack does 90 more damage.
Weakness: Darkness (x2)
Resistance: Fighting (-30)
Retreat: 1

Path to the Peak

Path to the Peak (Chilling Reign) is more or less a rebirth of Power Plant (Unbroken Bonds) that stops all Rule Box Pokemon. It makes it particularly powerful, and the new Rule Box wording makes it both future proof while it deals with problem cards of the past. I don’t necessarily have a great combination for this card because it's fairly splashable. I like how it can shut off Dauntless Shield on Zamazenta V (Sword and Shield) to further give decks answers to difficult to answer cards. Translation:
Path to the Peak – Trainer
Stadium
Each player’s Pokemon in play with a Rule Box has no Abilities.
This Stadium stays in play when you play it. Discard it if another Stadium comes into play. If a Stadium with the same name is in play, you can’t play this card.

Zeraora V (Chilling Reign) seems to be a cute tech from Rapid Strike decks because it can do a decent bit of damage with Cross Fit, but even more if one of your Rapid Strike Pokemon attacked the last turn. The best part about this Pokemon is that Mew (Unbroken Bonds) rotates out of Standard in September, which allows you to always hit the snipe! Play this with Rapid Strike Energy (Battle Styles) to attack very quickly! Translation:
Zeraora V – Lightning – HP210
Basic Pokemon (Rapid Strike)
[L][C][C] Cross Fist: 100 damage. If any of your other Rapid Strike Pokemon used an attack during your last turn, this attack does 160 damage to 1 of your opponent’s Benched Pokemon. (Don’t apply Weakness and Resistance for Benched Pokemon.)
When your Pokemon V is Knocked Out, your opponent takes 2 Prize cards.
Weakness: Fighting (x2)
Resistance: none
Retreat: 2

Blissey V (Chilling Reign) seems like a great way to accelerate Energy into play, and it truly reminds me of Centiskorch VMAX (Darkness Ablaze). Blissey Bomber seems busted because you can power up to three Energy from your Discard Pile to the Pokemon and continuously attack for more damage. I’m torn if this is a standalone concept or a great way to get energy into play for Shadow Rider Calyrex VMAX. I guess we will find out soon enough. Translation:
Blissey V – Colorless – HP250
Basic Pokemon
Ability: Natural Cure
Whenever you attach an Energy from your hand to this Pokemon, remove all Special Conditions from this Pokemon.
[C] Blissey Bomber: 10+ damage. This attack does 30 more damage for each Energy attached to this Pokemon. After doing damage, you may attach up to 3 Energy cards from your discard pile to this Pokemon.
When your Pokemon V is Knocked Out, your opponent takes 2 Prize cards.
Weakness: Fighting (x2)
Resistance: none
Retreat: 4

Chilling Reign is one of the most exciting sets to be released on PTCGO in years, and I’m stoked to try out these concepts as soon as they are available in-game. I’m still trying to figure out the entire contents of our English set, but I guess I’ll have to wait until that gets formally announced. If you’re looking to pick up PTCGO codes when this set drops or anything else in-game, use code zlesage5 at PTCGO Store to save 5% on your next order of PTCGO codes. I’m going to continuously work on discovering the newest archetypes in this set and let you know which ones have a chance in our metagame.